Rosemary and Pineapple Glazed Ham recipe is my grandmother’s recipe that was passed down to my mother and then to me. The only alteration in this recipe comes from none other than the Greedy Girl, Chantay Neil. Years ago I saw that she added fresh rosemary leaves to her pineapple glaze and decided to give it a go. I have never looked back. Rosemary and Pineapple Glazed Ham is absolutely delicious! If you don’t like rosemary, leave it out and follow all of the other steps here.

Traditionally in my family we boil the ham first to not only tenderize the meat but to remove the excess salt. Cured hams are extremely salty and we find that boiling it first helps to reduce the salt significantly. To flavor the meat, the ham is boiled with  whole cloves and allspice.

We use pre-cut pineapples to dress our holiday ham and reserve the liquid for the glaze. You can use freshly made pineapple juice and pulp for this  but we choose the easy way out. I’m sure a fresh pineapple with fresh juice would make this truly delicious. In the glaze also goes mustard, sugar, maraschino cherry juice and of course rosemary leaves. It is cooked until it is thickened and reduced.

Once the ham has boiled, we remove the skin and score the ham so the glaze and cloves can get into the meat. Scoring the ham means using a very sharp knife to make cuts on the surface in a patterned way. In each cut, we place whole cloves to flavor the ham.

The ham is glazed with the reduced pineapple syrup once before going into the oven and again midway the bake. The eternal rule is to scoop up that glaze from the baking pan and save it to pour over the slices during service. 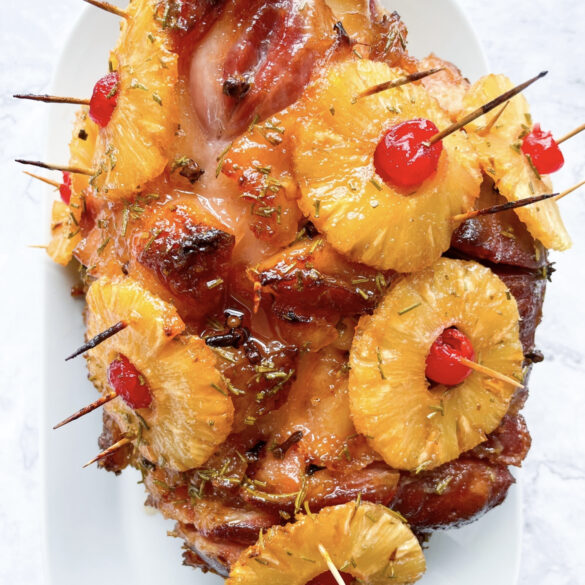